Mayor Kathy Chiaverotti announced at the end of October that she will not be seeking a fourth term. Five candidates are looking to succeed her. In alphabetical order, they are: Scott Dickmann, Dan Dombrowski, Thomas Kapusta, Rick Petfalski, and Robert Wolfe. A spring primary election this coming Tuesday, February 18, 2020, will narrow the field down to two candidates for the April general election.

Following is a collection of candidate contact information and other various election resources.

MuskegoWisconsin.com encourages Muskego residents to exercise their constitutional right - and really, duty - to vote this coming Tuesday, February 18, 2020. Watch our Facebook page and Web site for more voter information and candidate details as we get closer to narrowing this five-way race.

As we approach the spring primary election, and with it, a five-way race for mayor, what local issues are important to you? What will be deciding factors in how you vote? Feel free to share your thoughts and ideas in the comments section below.

Sample ballot for the primary election this coming Tuesday, February 18, 2020

The candidates for mayor respond to questions from the Milwaukee Journal Sentinel, published on January 29, 2020

Following is video footage of the candidate forum sponsored by the Muskego Area Chamber of Commerce & Tourism, held on January 29, 2020: 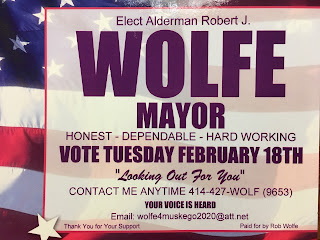